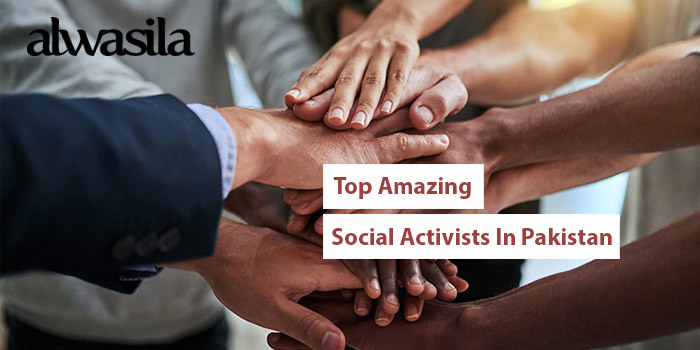 Social working can be called a profession for people around the world but the social workers in Pakistan think of it as their duty to serve humanity. They believe it as part of their religion, Islam. The amazing Pakistani social workers have always proven their true nature of faithful dedication and service. They have dedicated their life to their causes and have led their businesses in service of humanity in such a way that they have become lights of hope to people that really need it.

It is the generous people of Pakistan that have made Pakistan rank in the top 10 social working countries around the world. There is no denying that during the past few years, a large number of social workers in Pakistan have contributed to the best platforms for social issues.

In this blog we will get to know those amazing and generous personalities who have helped Pakistanis and stood still throughout the crisis.

Among the hundreds of social activists in Pakistan Asif Ismail made a huge effort in keeping the nation free of poverty and education. He founded many platforms to help and educate humanity and Al Wasila is one of them. Alwasila has been functioning since 2007. After his tireless efforts and dedication Al Wasila was officially registered as a trust in Pakistan in the year 2012. In a few years he surpassed millions of funds, helping thousands of poor families in Pakistan.

This man of nation never stopped, from 2007 to 2011, he was the first Head of Islamic Department at "Reflections School." There, he tried out several ideas that he is now bringing to Fajr Academy. In addition, he started and runs the micro - finance Rozgar Plan, the health care Markaz-e-Shifa, the emergency management Alwasilah, and the Rehen Sehen Program, which refurbishes trash and gives it to people who need it.

Who in Pakistan hasn't heard of this incredible social activist? There are stories of many gangsters sacrificing their lives so that he might work one more day. He is so respectable that people commit their fortunes to him. He began working on constructing a welfare system when he was 19-22 years old, and he continued his efforts and loyalty for Pakistan till his last breath.

Addressing the social issues and crisis, a middle class guy with a low income never quit. Instead of building his own empire, Zafar Abbas the most named social activist in Pakistan successfully delivered social societal issues and gave appropriate answers for such challenges confronted by the lower level of society in numerous sectors, including education. In 2010, Zafar Abbas embarked on the never-ending journey that is now known as The JDC Foundation Pakistan. It's welfare, a humanitarian and non-profit recognized NGO that began with the express objective of fulfilling humankind's basic necessities.

Unlike most social workers in Pakistan, Ansar Burney's social service has never been limited to education and finance. He has always fought for true human rights and is internationally renowned as an activist whose efforts have been successful in securing the liberation of about 700,000 inmates from all over the world. These have included individuals imprisoned on spurious charges, people released from commercial and illegal jails, illegal immigrants, and those liberated from slave work camps; some after as many as 55 years of unlawful captivity.

Ansar Burney founding trust has been working towards the benefit of society since its inception in 1980. Experience and valuable efforts have proven the aims that serve the basic purpose of serving humanity. These years have seen how Ansar Burney has labored, and it goes without saying that his honest, valiant effort has earned him the Hilal-e-Imtiaz and many other honors.

Imran Khan, the best captain in the entire world, the most liked political personality in Pakistan who has made a debut and built a corner of likeness and trust in almost every Pakistani's heart did not back himself in helping the nation. His dream of building a hospital after his mother has helped millions of Pakistanis suffering from cancer and still providing free services to cancer patients. Pakistani’s Captain being an amazing Pakistani social worker continued his services and now his Shaukat Khanum Memorial Trust has established a presence in more than sixty-five cities across Pakistan through Hospitals, Diagnostic Centers, Walk-in Clinics (cancer screening centers), and Laboratory Collection Centers, and has been identified for its contributions to mankind by both the Civil Rights Society of Balochistan as well as the WHO.

Because of the way he dresses, it is not difficult to identify him as the leader of the Chhipa welfare trust. One of the most prominent social activists in Pakistan, Ramzan Chhipa's compassion for his fellow humans compelled him to give up everything else and devote the rest of his life to helping others who are less fortunate. His effort, which initially concentrated on Karachi, has since expanded across the country and includes a sizable ambulance fleet. Ramzan Chhipa is prepared to handle any crisis that may arise thanks to the establishment of a network of service centers by him.

This amazing Pakistani social worker continues his trip and efforts, and his organization is continuing to expand thanks to the generosity of his fellow countrymen.

Dr. Abdul Bari Khan, founder of Indus Hospital, is one of the amazing social workers in Pakistan. 1986, Dr. Abdul Bari Khan got his medical degree from Dow Medical College, and in 1995, he completed a residency in cardiac surgery through the College of Physicians and Surgeons of Pakistan. As a result of seeing how bad the situation was in Pakistan's healthcare industry, this man decided to make a name as a social worker in Pakistan and made the decision to open a hospital that would assist in mending the nation's decrepit healthcare system. As a result, he and a group of other funders opened The Indus Hospital, which is the first free document management hospital in Pakistan.

Being an expert Renal Surgeon with 44 years of experience practicing at Sindh Institute of Urology and Transplantation (SIUT), Dr. Syed Adeeb Ul Hasan Rizvi is one of the Social workers in Pakistan, has worked tirelessly for generations to establish his institution into a premier urologist and transplants facility in the region. He and his staff have worked tirelessly to give free medical services ranging from therapy to medicine, surgeries, and post-treatment therapy. They have a past of treating society's rich with respect and asking for its support in exchange for their help. Such is this wonderful Pakistani's passion that, over all difficulties, he has so far been able to deliver the best medical treatment to the needy and worthy.

Another social worker in Pakistan, Bashir Ahmed Polani was born in a wealthy and religious Bantawa family, and his father, Abdul Ghaffar Polani, was a successful businessman. In the early 1990s, Maulana Bashir Farooqi and a few others began their charity and humanitarian activity. Later, on May 15, 1999, he founded the 'Saylani Welfare International Trust,' a non-profit organization. Saylani Welfare Trust has a monthly impact on the lives of millions of people by investing millions of dollars in various programs and teaching thousands of students and patients.

Born on October 1st, 1915, Maulana Abdussatar Khan Niazi was a well-known religious figure in Pakistan. When many people were left homeless during the heavy flooding in Sindh and Punjab in 2010. Along with other charitable individuals, Maulana Abdul Sattar arrived to help the bereaved victims. To provide a bit of assistance, Maulana Abdus Sattar likeminded social workers in Pakistan from different professional and societal areas gathered in Pakistan. In Maulana Abdul Sattar's ideal world, the poor and defenceless lead happy lives in a place of peace, compassion, and justice. Along with operating throughout Pakistan, we also have helped Rohingya and Syrian refugees in need of emergency assistance.

Serving for decades, these generous people have consistently offered their best efforts for the benefit of their society. Motivation for inspires others to volunteer or work for a certain cause, as the great social workers in Pakistan stated above. Some of them have established careers in other fields, but they are Pakistan's most admired social activists because of their commitment to helping those in need.